2012 US Olympic Team Boxer Queen Underwood will be teaching the next 5 week boxing course at MKG Seattle starting on June 8th.

These classes are suitable for ALL levels of experience from beginner to advanced.  These 1 hour Classes will be… offered 2 days a week. No membership required or minimum classes attended.  Individuals can decide to drop in class at any time.  Cost is only $5 for current MKG members and $10 for non-members.

Queen is the new 2013 Continental Champion at 60kg.  She is a six-time national boxing champion including a 2009 Continental Championship; 2010 Bronze medal at the World Games in Barbados; 2010 National Champion; a gold medalist at the 2012 USA Olympic Trails in Spokane, WA; a 2013 Independence Cup Bronze Medalist and a 2013 USA National Champion. Queen has been a frequent medalist in international competition boxing in Ecuador, Canada, China, Ireland, Venezuela, Trinidad, Barbados and a host of other nations. 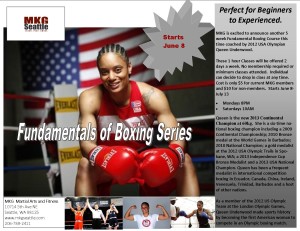