Major news Seattle MKG, TBA, Muay Thai and MMA community!  Grandmaster Chai is returning to Seattle, WA for the first time in 5 years!  Come learn from the Godfather of Muay Thai in the USA.

NW Kali/Ajarn Chris Clarke in association with MKG Seattle is proud to host a weekend seminar with Ajarn Chai  Sirisute this October 26th and 27th, 2013. 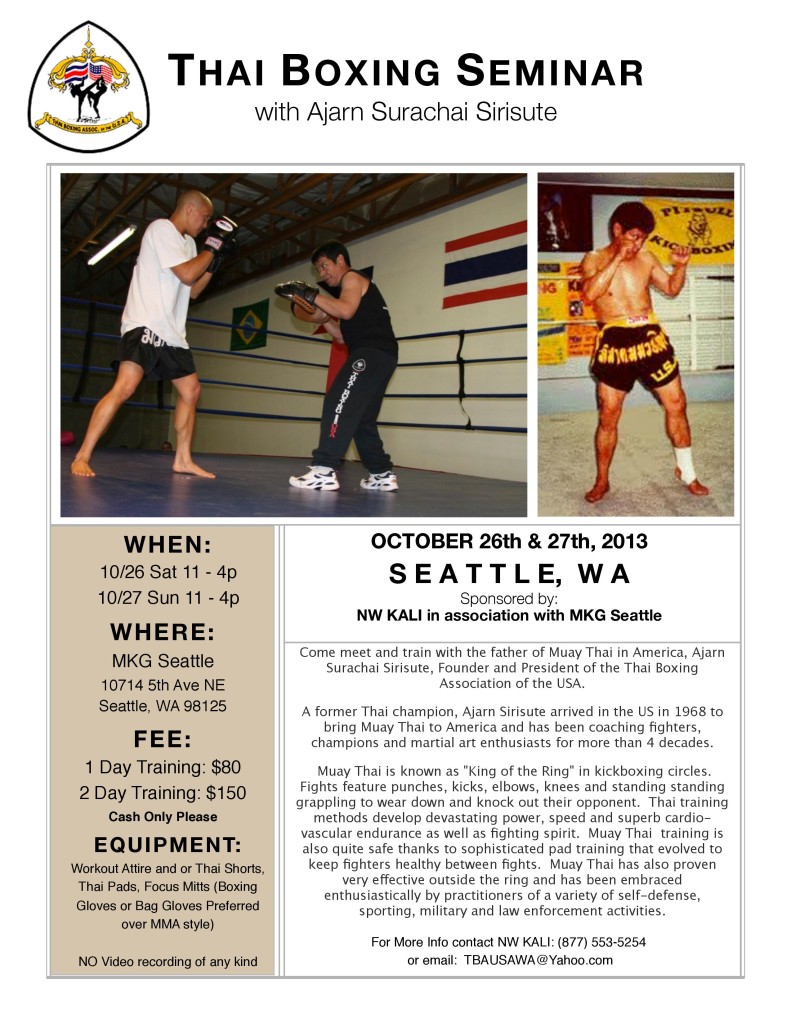 For more information on the Muay Thai Classes at MKG visit our Thaiboxing page here or click on the Get Started button below to request information.

Below is a profile of Master Chai written by his student Terry Tippie.  You can find out more by visiting the Thaiboxing Association of America website at www.thaiboxing.com

Surachai Sirisute, known to his students as “Ajarn Chai” (Ajarn means head instructor), is the founder and President of the Thai Boxing Association of the USA. The son of a prominent Bangkok lawyer, the young Chai Sirisute was encouraged to follow in his father’s footsteps. But Sirisute had a fascination with Muay Thai and would kick his father’s heavy bag whenever he could. Recalling his own childhood nature Sirisute remembers that he could be quite a handful for his parents, “After dinner my dad would just have me go kick the heavy bag to wear me out.”

At the age of six he had also acquired the reputation of a hell-raiser and would taunt the boys in a neighborhood Karate school taught by a Chinese man, Master Chen, who was to become his first teacher. The young Sirisute had no use for the uniforms, lines and stances of Karate and proclaimed loudly that he could best any kid in the school. Master Chen agreed to set up a sparring match and soon realized that this precocious six year old was mopping the floor with his 8 and 10 year old students. But Master Chen was determined to teach the boy a lesson in discipline, so Chen gave a mind-over-matter demonstration that amazed and frightened the young boy. Sirisute recalled, “I couldn’t believe it. I got so scared. After that I just shut up and got into line and started throwing punches with the rest of them.” Perhaps it was in Master Chen’s class that Sirisute first learned the value of his now familiar mantra of ‘discipline and respect’.

Sirisute’s Muay Thai teacher, Ajarn Suwong, made a lasting impression on him. Ajarn Suwong had had a prophetic dream, and stated flatly when he met the six year old Sirisute, “This is the champion that will spread Muay Thai to the falang [to the foreign lands].” Whether that was Sirisute’s fate or an internalized message from a cherished mentor, that mission became Sirisute’s life’s work. It remains one which he has pursued with an almost spiritual zeal.

As a boy Sirisute studied both Muay Thai as well as Karate and earned his black belt in Shorin at the unprecedented age of 12, an age at which he also started to fight in the ring in Muay Thai. Sirisute fought over 72 fights in Muay Thai. After he retired as a fighter he came to the United States in 1968 to teach in America. As he would soon find out American 1960s culture was very different than the Thailand fighting circuit. With hair mid-way down his back and in rock-solid shape he stepped off the plane and shortly thereafter wound up at the Woodstock rock concert. Recalling the wild behavior he saw Sirisute mused, “Man, I thought Americans were completely crazy.” Sirisute by this time had a well-developed penchant for mischief and somehow managed to befriend and train a notorious motorcycle gang called The Hell’s Angels. “I had no idea who they were,” shrugs Sirisute. That is, until the FBI explained it to him. Grimacing embarrassedly Sirisute continued, “So, then I trained the FBI.” [You could see both in the same class during the 1970s. –TT]

Nonetheless, Sirisute had a vision of spreading Muay Thai that he was determined to pursue. The early years were lean ones during a time in which public knowledge of Muay Thai was non-existent and hostility from other martial arts was fierce.  He defended almost weekly challenges from Karate and Kung Fu experts who soon found, to their surprise, that Sirisute wasn’t an easy man to run out of town. In the days before personal injury lawsuits were common in the U.S. it was standard practice to smile politely, close the door and beat the tar out of the challenger. And that was precisely what Ajarn Chai did. [Those challenges were still happening in the late 1970s when I met him.–TT]

1983 picture of Ajarn Chai (left) and Terry Tippie in the backyard of his Pomona,California house. Despite the grace of the motion Ajarn Chai’s kick has a bone jarring, jackhammer-like power derived from the incredible speed of his kick.

During the 1970s and early 1980s Ajarn Chai taught at several Southern California colleges: Chaffey College, Claremont Men’s College and Cal. State San Bernardino. Also during those years Ajarn Chai trained students at his home, the backyard of which was converted into a Thai-style camp. Many of Ajarn Chai’s early fighters, such as Mike Goldbach, Reggie Jackson, Glen Hernandez and Don Boyd, came out of a backyard training environment. It was this core of fighters who Ajarn Chai lead to Thailand in 1982 to enter the first American team to compete in the Muay Thai World Championships.

Sirisute also fought battles with the martial arts establishment over fighting procedure, specifically the Wai Kru [“respects to the teacher” dance before a fight], uniform and use of knees & elbows. “They told me that my fighters couldn’t wear the short pants to fight but had to wear a Gi,” growled Sirisute. Shaking his head, quot;They used to laugh and ridicule Thai Boxing [fighters] when they would do the Wai Kru. But they don’t laugh any more because we always knock ’em out.” Thanks in part to the early efforts of Sirisute Muay Thai fighters no longer have to struggle against this kind of indifference.

In 1978, Sirisute met a young Filipino-American high school teacher named Dan Inosanto. Inosanto trained as a student in Ajarn Chai’s backyard during these years and they soon became close friends. Once Ajarn Chai gave Inosanto the task of kicking the leaves on a tree, then forgot about him and went shopping, leaving Inosanto to swelter in the LA summer heat. When Ajarn Chai returned several hours later Inosanto was so exhausted and dehydrated that he could barely stand up. But he still had his hands up and was still kicking. Sirisute exclaimed, “Oh my God…I forgot all about you,” and held his sides and let out a piercing falsetto cackle. Actually Sirisute had not forgotten about Inosanto but was testing Inosanto to see whether he would keep going and whether he would come back. Inosanto did come back, and the friendship that grew up between these two men in those years has served both well over the years. Already well known in the U.S. Inosanto introduced Sirisute to teaching seminars, which greatly helped Ajarn Chai extended awareness of Muay Thai in the U.S.A. as well as internationally.

By the early 1980s word of Muay Thai was spreading fast in the martial arts community. In 1983 Inosanto introduced Sirisute to Tom Landry of the Dallas Cowboys. The diminutive 5’5″ Sirisute was undaunted when greeted with skepticism by the players. “I just pointed at him [Tony Dorsett] and told him to hold the pad for me,” explained Sirisute. Taken aback at the jackhammer like impact of Sirisute’s right leg on the Thai pad, Dorsett exclaimed, “This guy isn’t human!” The Dallas Cowboys were soon throwing Thai kicks and skip knees, and the Cowboy’s incorporated Ajarn Chai and Muay Thai into their pre-season conditioning until the time of Landry’s departure in 1990. In fact, all-pro defensive end Randy White is reputed to have developed the hardest Thai kick ever recorded–a stunning 450 lbs. per square inch.

Throughout the 1980s and 1990s Sirisute has worked tirelessly to teach Muay Thai seminars to eager students around the world.  The organization he founded, the Thai Boxing Association of the U.S.A. now has more than 70 branches in the U.S. and has gained representation in almost every U.S. state. It has also expanded to 15 countries around the world. And Ajarn Chai continues on his path of spreading Muay Thai around the world from his home in Southern California