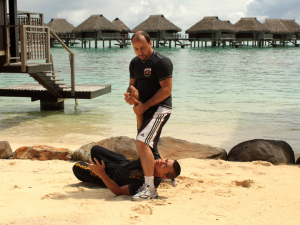 Maphilindo Silat is a compilation of all of the various systems of Silat that Guro Dan Inosanto studied under masters from Malaysia, the Philippines, and Indonesia.  (Literally Ma-Phil-Indo)

Guro Dan Inosanto created Maphilindo Silat to honor various instructors of Silat he trained under and to showcase the unique strengths and insights that they’d passed on to him.

Like Filipino Kali and other arts taught in the Inosanto Lineage, Maphilindo Silat is a practical, reality based art with a non-traditional approach. It was designed to engage and eliminate opponents aggressively and quickly, while maintaining fluid movement to move effectively from one opponent the other in a confrontation. This program teaches you to use the whole body as a weapon, but you can also improvise and use pens, scarves, small flash lights and even keys as unorthodox weapons. 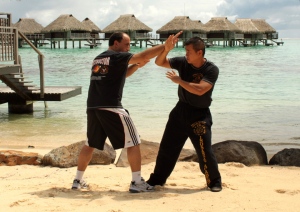 Silat is a comprehensive martial art that can be traced all the way back to Alexander the Great. There is some historical evidence that it’s ancestral art, called Silek, was first learned and proliferated through the island of Sumatra by members of Alexander’s forces. It was later disseminated by the ancestral Malayo-Polynesian people and has found common expression in many of the other arts that evolved among the populations that spread and flourished into modern day.

This workshop is open to the public and individuals of all levels and abilities.

This workshop is part of a weekend with Professor Salem Assli.  Be sure to see his weekend Savate seminar and Friday night Canne de Combat workshop as well.